The Heritage 130P is one of our favorite telescopes out there, and it’s jam-packed with features that make it a great choice for the beginner or as a grab n go telescope for the more experienced astronomer.

The Sky-Watcher Heritage 130P (also sold in the US as the OneSky by Astronomers Without Borders) is one of the more unusual mass-market instruments out there, but performs wonderfully and provides some of the best value of any beginner telescope in its price range. It’s also super portable, making it a solid option for an experienced astronomer looking for a smaller and more convenient instrument as well. The Heritage 130P is such a success that Sky-Watcher has recently launched a larger 150mm version, which is currently only available in Europe. We highly recommend that telescope as well. 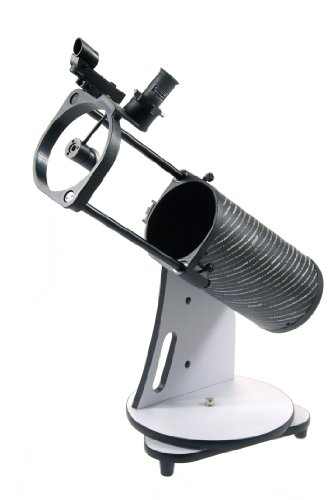 The 130P performs wonderfully and provides some of the best value of any beginner telescope in its price range. It’s also super portable, making it a solid option for an experienced astronomer looking for a smaller and more convenient instrument.

The Heritage 130P is a fairly standard 130mm f/5 Newtonian, a design popular for both tabletop Dobsonian instruments as well as equatorial or GoTo-mounted scopes on tripods. At f/5, collimation is still fairly easy to do, performance is acceptable with cheap eyepieces like the ones supplied, and coma is only slightly noticeable at the edges of the field of view. The 130mm aperture is also enough to show you the brighter deep-sky objects as more than faint fuzzy smudges.

Uniquely among telescopes of this size and tabletop instruments (besides its new sibling the Heritage 150P), the Heritage 130P has a collapsible tube. This design works similarly to Sky-Watchers larger FlexTube/Collapsible Dobsonians, with two struts that telescope (yes) out of the lower tube assembly with an upper frame attached to them.

Unlike the FlexTube scopes, the upper frame is not really a tube so much as a ring with the focuser/finder/secondary attached, which is more like an ultralight premium Dobsonian. Having a single ring makes the telescope more prone to flexure – wed suggest not using any heavy eyepieces or a Barlow lens on the 130P as they may cause the focuser to sag, affecting collimation and potentially damaging the scope over time.

Speaking of the focuser – its a bit unusual. In order to make the scope as compact as possible, the Heritage features a lightweight 1.25 helical focuser. It has zero play in it – unlike the cheap 1.25 rack-and-pinion focusers supplied on many entry-level scopes – but fine adjustment is a bit difficult to achieve and focusing by twisting the eyepiece can be a bit unusual.

When collapsed, the Heritage optical tube fits in most handbags, and with the base attached itll fit in a backpack. You cant really do this with a typical 130mm f/5 optical tube due to its length, or even a smaller 114mm tabletop Dobsonian. This makes the 130P great for travel on airplanes, public transit, or in situations where space is otherwise limited.
The 130P optical tube also sports a Vixen dovetail bar to easily attach it to not only the included tabletop mount but almost any astronomical telescope mount with a Vixen clamp/saddle, which means that you can put it on a full-sized equatorial or alt-azimuth mount/tripod if you desire an upgrade.

The Heritage 130P uses a single-arm Dobsonian mount which is pretty typical among tabletop telescopes. The altitude axis is a bolt with a plastic washer to act as a bearing, while the azimuth axis uses melamine on Nylon pads. The scope attaches to it with a simple standard Vixen dovetail bar and clamp, making it easy to remove for transport. With some effort and tools the mount can be dismantled to pack nearly flat if you need the scope to fit in a suitcase, though this is not a very intuitive process.

The Heritage comes with two eyepieces, 25mm and 10mm Super Plossl eyepieces that provide 26x and 65x magnification respectively. These are good starter eyepieces, though you might want something for higher magnification later. A 6mm gold-line (108x) and/or 4mm planetary eyepiece (163x) would be good choices. As previously mentioned, we dont recommend using a Barlow lens with the 130P due to the strain it can put on the focuser drawtube and upper tube assembly.

Like most beginner telescopes, the Heritage 130P is also supplied with a red dot finder to aim it at targets. Given the 130Ps wide field of view, the red dot is all you really need to locate most objects. Click here to check the price on Amazon.